My plans for an ultra low energy house 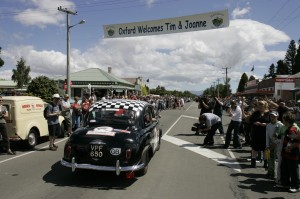 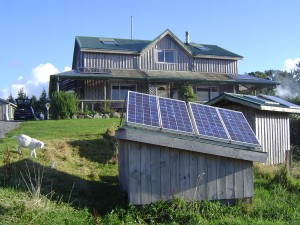 We also experienced first hand some renewable technology at work.  We saw an enormous wind farm in Southern India and in New Zealand we stayed at the inspiring EcoInn where they have micro hydro, micro wind, solar PV, solar thermal, biomass heating, rainwater for drinking and river water for washing.  The telephone was the only mains connection. 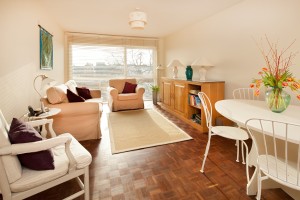 Once back in Oxford, England, we started going to events organised by COIN and became very focused on climate change.  We comprehensively refurbished our flat, The Oxford EcoFlat, to make it an energy efficient and healthy place to live.  The results were surprisingly good despite the constraints of being a flat in a block.  Of three eco-renovated homes studied by an Oxford Brookes MSc Student, Simon Cheung, our flat came out with the best results. 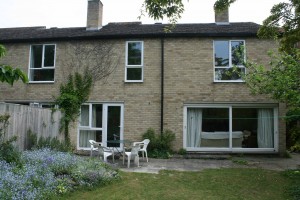 With one child and one on the way we moved to a 1960’s four bedroom, end of terrace house in Central North Oxford.  We had more ambitious plans for what we might do and met with several architects.  Of those we saw it was Charlie Luxton who impressed us with his ideas and his willingness to roll up his sleeves and get involved.

Charlie suggested we use External Wall Insulation (EWI) and render on the side and back of the house and use Internal Wall Insulation (IWI) at the front to maintain the original brick wall along the front of the terrace.  He also came up with a more open plan layout to make the house work better for us internally.  We had some computer modelling undertaken of the thermal performance of the house with the proposed improvements using the Passive House Planning Package or PHPP for short.

The PHPP model suggested the existing building would use 180 kWh/psm/pa.  As our house is about 114 sqm that equates to 20,520 kWh pa.  This is not far off the national average for gas consumption which is about 18,000 kWh of gas (although this figure includes gas for space heating, hot water and cooking).  In fact, in our first year at the house we used about 10,000 kWh of gas for heating and hot water about half what the model predicted.

The model for the refurbished house assumed the following measures had been done:

This reduced the predicted space heating demand down to a very modest 28 kWh/pms/pa or 3,200 kWh/pa for the whole house.

Our development of 13 houses was built in 1966/67 to a design by local architects Brett and Pollen.  It falls within the North Oxford Victorian Suburb Conservation Area and there is a restrictive covenant that means that consent from every home owner is required for any external alterations. 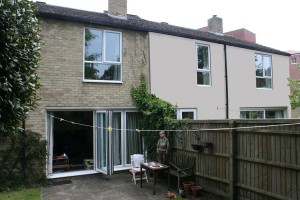 Our plans for external wall insulation and render on the side and back of our house were not well received and we were only given consent to insulate and render the side (gable end) wall.  We looked at the potential to mix internal and external insulation but concluded that this would be inefficient and difficult to do well.  We reluctantly concluded we should look at an internal wall insulation solution.  This threw up various concerns as follows:

One of my work colleagues, Steve Harris, visited our house and suggested we build a new brick wall around the front, side and back, thereby forming a new large cavity to insulate whilst maintaining the brick look of the development.

We found a brick that matches the texture of the existing wire cut bricks and as we can’t match the colour we are using the services of Construction Cosmetics to tint the bricks to almost exactly match the original colour. 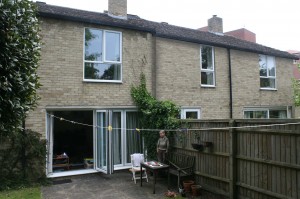 Charlie Luxton produced a set of images to suggest what the house would look like with the new brick walls.

Our neighbours liked the idea of using bricks more than they did the EWI/Render option but several people were unhappy about the step it would create in the front, currently straight, wall.

To find a compromise I suggested that we only build new walls on the back and side of the house.   We then submitted a new application for planning permission to this design. 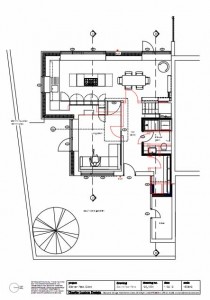 Along with the new brick wall to form a second insulated cavity we are also planning to install the following measures:

With all this work we hope to achieve a very comfortable, stylish ultra low energy home that will fulfil our needs for many decades to come.