How can I heat my super insulated house – part one 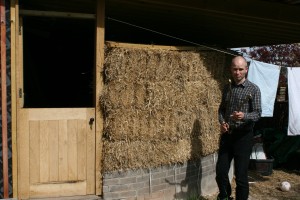 Steve has been an invaluable source of advice on this project and the proposed heating system has been heavily influenced by his views.

At the heart of the system is a thermal store. This is a large hot water cylinder with multiple fittings capable of receiving several inputs and offering several outputs. In our system the inputs will be the two solar thermal panels, the wood burning boiler stove and an immersion heater as a back up.

We could also install a device like an Immersun which would divert any unused electricity from our solar PV panels to the immersion heater instead of exporting to the National Grid. Given the large size (6 sqm) of our solar thermal collectors I’m not sure that an Immersun would help us very much. 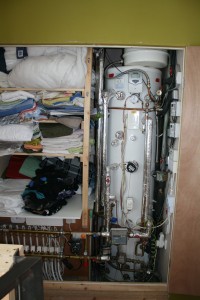 Steve has an Xcel Heatbank thermal store. It looks a bit space age due to the large amount of silver foil insulation and the heat meters he has fitted.

When hot water is delivered to the thermal store it is available for whichever outputs are connected. In our case we will have underfloor heating on the ground floor, radiators on the first floor, towel rails in the bath/shower rooms and domestic hot water to the bathroom/shower rooms.

For me, the three main advantages of a thermal store are:

1) The solar thermal can contribute to the space heating on sunny cold days.
2) It delivers mains pressure hot water (the shower won’t go cold when someone turns a tap on in the kitchen)
3) It offers the flexibility to add additional inputs and outputs. 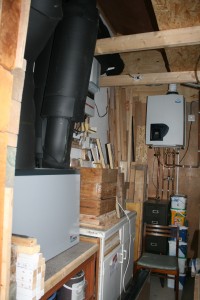 Our architectural designer, Charlie Luxton, thought we should keep the heating system simple and use an efficient condensing gas boiler (perhaps with flue gas heat recovery). This would be relatively cheap to install and would give us a simple, reliable, automated heat source. Tina Holt has gone down this route with her Passivhaus Retrofit. The house is so well insulated their heat demand is tiny so they burn very little gas.

We are keen to have a wood burning stove and I really like the idea of capturing the heat from a boiler stove in the thermal store for heating and hot water the next day. As we are in a smoke control zone any wood stove has to be listed as a DEFRA exempt appliance. We have only been able to find one such boiler stove that is exempt; the Dunsley Yorkshire. 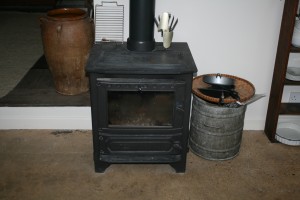 We had thought that we would have a gas boiler in addition to the wood burning boiler stove but one or other appliance is going to be idle much of the time so we thought we would see if we could survive without the gas boiler at all. At this stage it is difficult to gauge with any certainty how often the wood burner would need to be lit. If it is too onerous we would need to consider installing either a gas boiler or an air source heat pump.

In discussions with my colleague, Stuart Major, at R-ECO, the Renewable Energy Co-operative, we have identified a small pellet boiler from Windhager as a possible alternative to the wood burning boiler stove.  This would mean we can’t make use of the free firewood we have been offered but it would be automated much like a gas boiler, except it will need filling with pellets every few days.  We would use it as a heat only boiler delivering hot water to the thermal store as required by a thermostat and timer.  This option would mean we definitely wouldn’t need any further heat source and it would also resolve the risk of overheating.  The Dunsley Yorkshire generates about 13 kW in total with 4 kW to the room and 9 kW to the hot water whereas the Windhager Firewin 90 has an output of 9 kW in total with 0.3-0.8 kW to the room and 4.7 – 7.8 kW to water .  With our high levels of insulation there is some concern that we would overheat if the wood burner was on for too long.